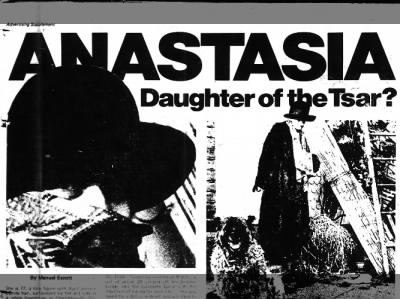 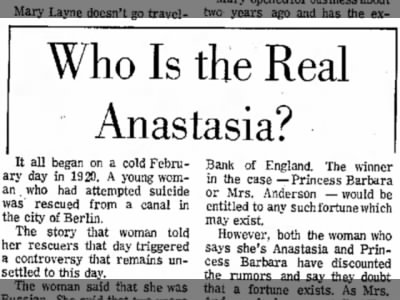 Few things capture the imagination like an unexpected plot twist. Perhaps this is why the mystery of Anastasia Romanov was so compelling that speculations surrounded her fate for decades. When Anastasia and some of her siblings were rumored to have survived the mass execution of their family, impostors cropped up by the dozens. The most famous of these was Anna Anderson, who controversially claimed to be the youngest Romanov daughter even until her death in 1984. 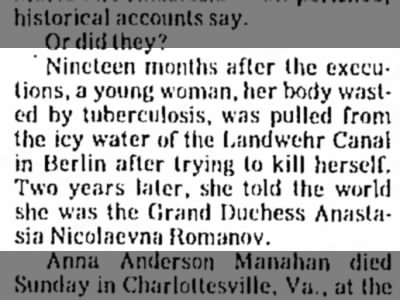 As mentioned in the article above, the woman who came to be known as Anna was recovered after jumping into the Landwehr Canal in Berlin, an attempted suicide. Two years later she revealed her identity: the Grand Duchess Anastasia Nikolaevna of Russia.

This revelation didn’t come without scrutiny. For the remainder of her life, Anna Anderson fought to be recognized as the last remaining daughter of the murdered tsar. Though some found her claims credible, thought her appearance was consistent, and were swayed by her memory for childhood details, just as many or more refused to believe that this woman, whose behavior was often unstable, was the true Anastasia. 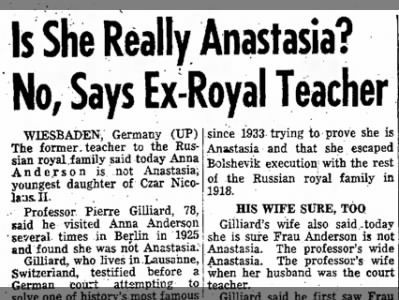 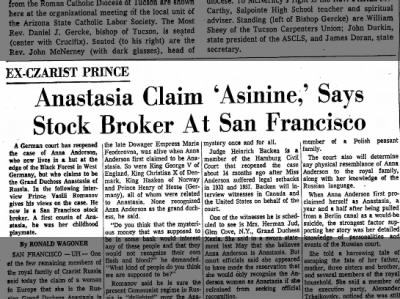 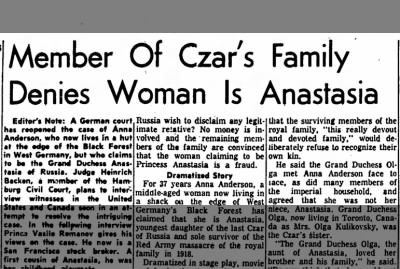 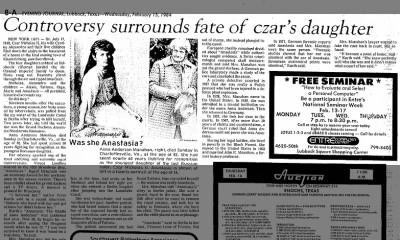 Anna’s supporters provided her with very comfortable living arrangements and staunchly defended her claims. Her story spread like wildfire, a sensational tale that was only enhanced by romantic reports of this strange potential turn of fate. 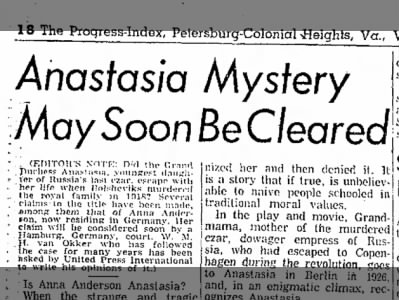 The matter was turned to German courts to decide whether or not it could be proven that Anna was truly Anastasia. But there was no great evidence for either side. Years and years of deliberation passed, and finally the German courts ruled that her identity as Anastasia was neither established nor refutable. Essentially, the truth of Anna Anderson’s claims to be Anastasia was left to the personal judgement of those who encountered her.

Anderson died at age 82 with her identity still undecided. It wasn’t until much later, in 1991 and 2007, that the bodies of the true Romanov family were discovered. DNA tests concluded that Anderson was not Anastasia after all, but a Polish factory worker named Franziska Schanzkowska, an assertion that had been made by Ernest Louis, the tsarina’s brother and Grand Duke of Hesse, after a private investigation in 1927. Why she pretended to be, or thought she truly was, Anastasia remains uncertain.

The history of Anderson’s years seeking recognition is a tale filled with sentimentality and intrigue, and it is thanks to this that Anderson’s story was so well-documented by the news over the last century. Read more about Anderson’s involvement here. This search has hundreds of articles speculating more generally about the mystery of Anastasia Romanov. Or try searching for one of the other impostors, other members of the Romanov family, or an unrelated search of your own on Newspapers.com’s search page.