In 1970s Maine there lived a friendly seal with a certain flair for showmanship. His name was Andre, and he was one of the Rockport area’s main attractions. 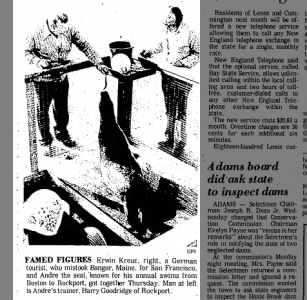 Andre was found by Maine resident Harry Goodridge when he was just a wee pup. The seal had apparently been abandoned, so Goodridge took him home and there he flopped and rolled around to his heart’s content. Goodridge took him down to the harbor daily, and soon enough constructed a floating, partially submerged pen where Andre could swim and lounge.

Before long, Andre and Harry were the talk of the town. Together they made up a most unusual team, entertaining growing crowds with Andre’s tricks, including twists, jumping through hoops, dancing, and dozens more. 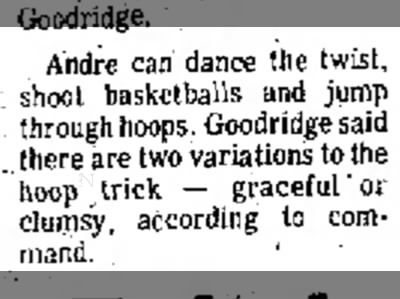 Andre became a well-known and beloved sight in Rockport harbor, and more and more people gathered to see him perform. The seal was a charming tourist attraction, and attract he did. 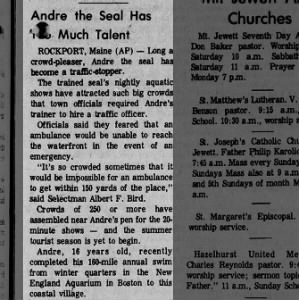 The seal was so friendly that fishermen grew frustrated with his tendency to swamp their boats as he climbed in to say hello. This happened most often in the winter months, when Goodridge left Andre to his own devices in the harbor. Andre was so good-natured and eager to please that Goodridge thought he might enjoy furthering his entertainment career in the New England aquarium in Boston. From then on, Andre was taken to Boston every winter to continue his series of tricks and to socialize with the seals there.

The spring after his first winter away, Goodridge made a risky move in deciding to let Andre swim the many miles back to Rockport harbor. Many people were skeptical that the seal would ever return, but Goodridge was certain Andre would prefer the lengthy swim to a long, stuffy drive. He resigned himself to the fact that Andre may indeed choose to swim away and never come back, and watched the seal disappear into the waters of Marblehead, Massachusetts. 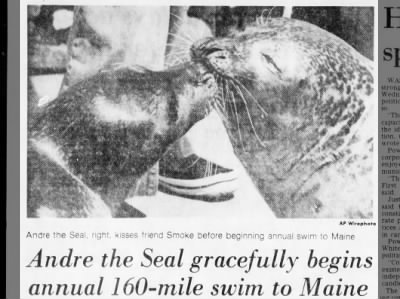 Goodridge’s faith in Andre was well-founded, as it turned out. To everyone’s delight, Andre was spotted in Rockport harbor only three days later. Andre’s spring journey became a tradition from that point on, complete with residents all along the coast keeping an eye out for sightings of the spotted gray seal. 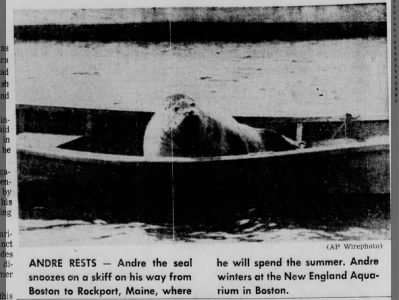 Andre continued to entertain the masses in both Maine and Massachusetts for years. But all good things come to an end—even the friendly, seal-shaped ones.

One July day, in the weeks following a bad mating-season fight with another seal, Andre was found dead on shore some eight miles from the harbor. Goodridge had noted his scars and unusual sluggishness following the fight and suspected, perhaps, that Andre would not perform again. Goodridge closed the door on the Andre years with acceptance and grace, noting that Andre had led a good life. 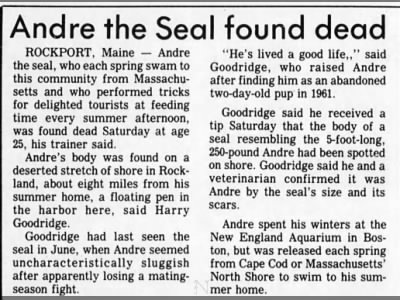 Find more articles about this heart-warming pair here, or feel free to make your own search using search or browse on Newspapers.com

2 thoughts on “Andre the Seal”