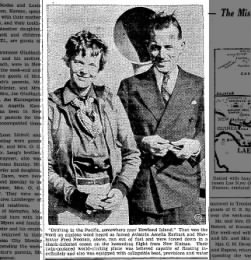 On July 2, 1937, famous aviator Amelia Earhart disappeared along with her navigator while attempting an around-the-world flight at the equator. At the time of her disappearance, the 39-year-old Earhart was the most famous female pilot of her day.

Earhart had first learned to fly in 1921, at the age of 23. Although she had a passion for flying, it was largely a hobby until 1928, when she gained fame as the first woman to fly across the Atlantic Ocean while a passenger aboard the plane Friendship. After this, flying became Earhart’s career, promoted by her publicist and later husband G.P. Putnam.

In June 1937, Earhart began her biggest record-breaking attempt yet: to fly around the world at the equator. Flying west to east, Earhart made it about three-quarters of the way along her planned route of approximately 30,000 miles and landed at Lae, New Guinea. For the next and most dangerous leg, she would have to fly to the middle of the Pacific and land on tiny Howland Island, aided by her navigator, Fred Noonan. 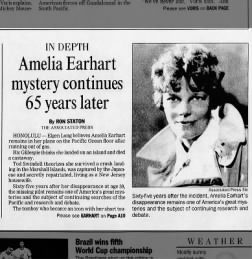 Once Earhart and Noonan left Lae, there were problems communicating with them by radio. As Earhart neared where she thought Howland Island should be, she reported her plane’s fuel was running low and that she couldn’t find the island. The last she was heard from in the air was on July 2, more than 20 hours after takeoff. She and Noonan never arrived at Howland Island, and the massive search effort was finally called off after more than two weeks of searching.

The mystery of what happened to Amelia Earhart and Fred Noonan remains unsolved today, though there are a multitude of theories about their fate. Perhaps the most common theory is that they ran out of fuel and crashed into the ocean. Also popular is the idea that, low on fuel, they landed on a small island in the Pacific and lived there for a time as castaways.

Interested in learning more about Amelia Earhart’s life and final flight? Start a search on Newspapers.com to find thousands of matches.