A Good Day for Flying

If you’ve a record to break in aviation, today’s the day to do it. On May 21, both Charles Lindbergh and Amelia Earhart completed transatlantic solo flights, one in 1927, and the other five years later in 1932. 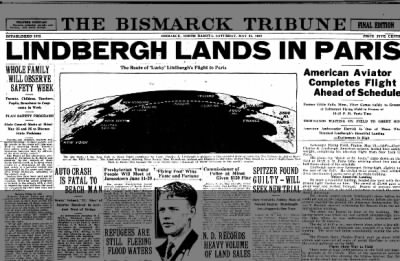 Lindbergh made the flight first in response to the challenge set by Raymond Orteig, who offered $25,000 to whomever could fly from New York to Paris. Such a flight was nearly twice the distance of the first successful nonstop transatlantic flight, completed by British fliers John W. Alcock and Arthur W. Brown in 1919. And although others also took up the challenge, Lindbergh was the only one planning on a solo flight. At nearly 8 a.m. on May 20, 1927, a sleep-deprived Lindbergh took off on a journey that had already taken the lives of six people.

Thanks to pulling an all-nighter before he left, Lindbergh’s exhaustion set in pretty early. To keep himself awake he spent some time flying just ten feet above the water, and at another point held his eyelids open with his fingers. Nevertheless, at 3 p.m. for Lindbergh (8 p.m. local time), The Spirit of St. Louis had slipped into the air over France. 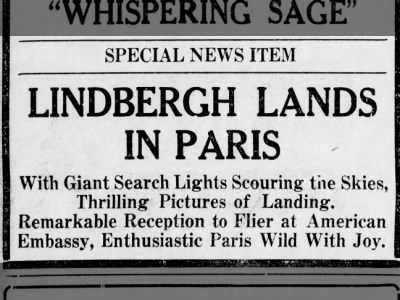 Thousands gathered to witness the landing of the solo pilot as he glided to a perfect landing at 10:24 p.m. local time. The flight had taken 33.5 hours, and Lindbergh hadn’t slept in 55 hours. His success instantly elevated him to celebrity status internationally.

In 1932 Amelia Earhart, already a beloved icon, set out to make the same grueling flight. She had crossed the Atlantic once before as one of a three-person crew, during which she kept the plane’s log. In an interview after landing she clarified that she’d done none of the flying, but said that someday she might try doing it again herself.

On May 20th that thought became a reality. She set off early in the morning from Newfoundland, planning to land in Paris as Lindbergh had. However her flight was beset with troubles, which Earhart recounts in the article below: 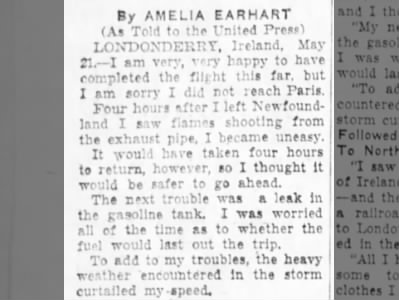 She landed in an unmarked pasture in Culmore, Ireland, after a difficult 15-hour flight. The landing was witnessed by only a couple of people rather than by throngs of fans, who still expected her in France. But even with the early landing, Amelia Earhart had done what only Lindbergh had done before: completed a transatlantic flight, alone and with no navigator or mechanic, in a single, nonstop trip. It was an incredible feat, and for her success she was given the Distinguished Flying Cross, the Cross of Knight of the Legion of Honor, and President Herbert Hoover presented her with the Gold Medal of the National Geographic Society. 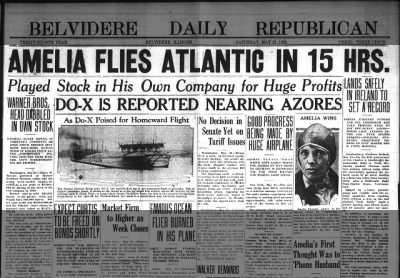 For more on Lindbergh and Earhart and their respective flights, try the following searches on Newspapers.com:
Charles Lindbergh
Lindbergh lands in Paris
Amelia Earhart (more here on her later disappearance)
Earhart lands in Ireland

And be sure to peruse the papers for more topics of interest using the search or browse pages.