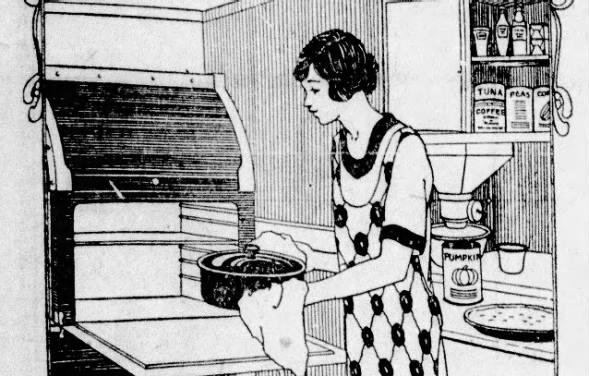 We love vintage newspaper recipes, but admittedly some of them can be hard to follow since they use different terms, tools, and techniques than today’s recipes. So we’ve complied our top tips and hints for deciphering the old recipes found on Newspapers.com™!

1. Formatting. Many old newspaper recipes are formatted as paragraphs rather than the numbered lists we’re familiar with today. Ingredients aren’t always listed separately in these recipes but instead are integrated into the recipe instructions. Be sure to carefully read older, paragraph-style recipes all the way through before making them, as some instructions and ingredients might not be in the order you’d expect.

2. Fractions. Today, fraction measurements are usually written with a forward slash between the two numbers (e.g., 1/2 cup), but a lot of older recipes use hyphens (1-2 cup). To the modern eye, this might look like the recipe is calling for “1 to 2 cups,” when in fact it’s calling for “half a cup.” Often, you’ll just need to make an educated guess about whether the number is a fraction or not. For example, it’s more likely that a small salad recipe calling for “1–4  cup mayonnaise” means “one quarter of a cup” not “one to four cups.”

3. Typos. Like anything published in a newspaper, recipes can have typos. Catching many of them just requires a bit of careful reading. If you find a measurement that looks like it might be wrong, an easy way to check is to search Newspapers.com™ for the same recipe in a different paper. Many recipes were published in multiple papers—and even in multiple years. So if something looks incorrect, check for the recipe in other papers and see if there are differences.

4. Bake times & temperatures. Many old recipes don’t list a bake time or temperature—usually because they were published before oven thermostats were invented in the early 20th century. This can be a challenge to modern home cooks, but a simple Newspaper.com™ search can come to the rescue. If you find an old newspaper recipe that doesn’t have a bake time and/or temperature, search more recent newspapers to see if you can find a similar recipe that does include that information. Often, recipes published in the 1940s and later will include bake times and temperatures.

5. Old brand names. You may come across old recipes that call for brand-name products that don’t exist anymore—and that you may not have even heard of! Once again, a search on Newspapers.com™ will often solve the mystery, since you can usually find a newspaper ad for the product that explains what it is—and then you can find a modern replacement! For instance, some old newspaper recipes call for “Egg-o,” which a Newspapers.com™ search reveals was an powdered egg substitute. 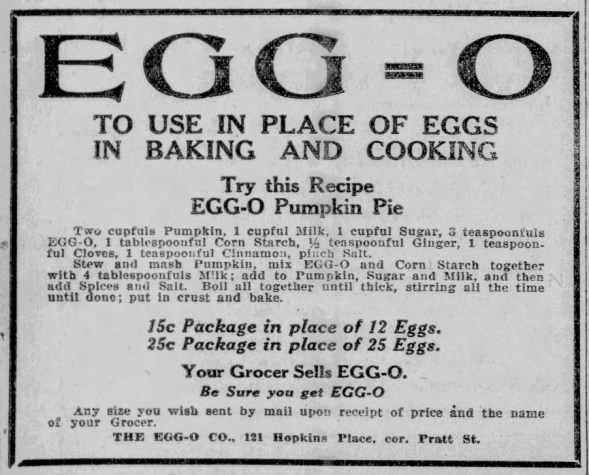 6. Package sizes. Many recipes will simply call for “1 box” of an ingredient (or “1 package” or “1 can”). Depending on when the recipe was published, package sizes may have been different from today. A quick way to check this is to search Newspapers.com™ for ads that were published in the same time period as the recipe, since many ads include information about product size.

7. Standardized measures. If you’re making a recipe from the late 19th century or earlier, keep in mind that standardized measures (e.g., 1 cup equaling 8 ounces, all teaspoons being the same size, etc.) didn’t start becoming popular until the late Victorian Era. So when cooking a recipe from before this time, you may need to be flexible, since “1 cupful of milk” might have been measured with whatever size cup was on hand and doesn’t necessarily mean exactly 8 ounces. (One common measurement we’ve seen is “1 square of chocolate,” which we discovered means 1 ounce.) 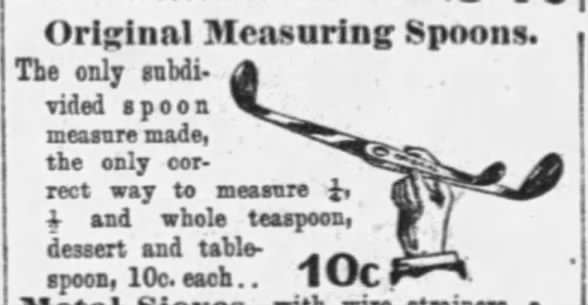 Some of the terms and measurements used in vintage recipes can likewise leave us scratching our heads today. Here’s a list of some of the ones we’ve come across most often:

Old newspaper recipes are a lot of fun to try, and you might even find a new favorite. We certainly have! They are also a valuable resource for learning about life during different eras of history—try a rationing recipe from World War II, for example, to learn how the war affected the way people ate!

Historical newspapers are also a great resource for finding old family recipes that have been lost to time. If you’ve misplaced your copy of grandma’s famous cookie recipe, try searching in newspapers for a similar one. Who knows? You might even find the exact recipe!