50 Years Ago Beatlemania Hits the U.S. 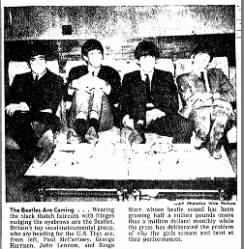 On February 7, 1964, four young British musicians brought mayhem and haystack hairdos to New York’s Kennedy Airport and a throng of 3,000 delirious, shrieking, hooky-playing youngsters. The Beatles invasion drove teenage girls crazy and made front-page news around the country days before most Americans even knew who they were. The band’s first two hits, “I Want to Hold Your Hand” and “She Loves You” were released in the States only weeks before the Beatles arrived, yet their popularity was enough to catapult the group into the hearts of American teens.

Today, the events of fifty years ago are imprinted in newspapers, recalled fondly by baby boomers, and appreciated by those who have enjoyed the Beatles since. When we think of the Beatles, many remember their famous appearance on the Ed Sullivan Show on February 9, 1964. While it was the most iconic moment of their first visit to the U.S., there were many more memorable appearances of the Fab Four—John Lennon, Paul McCartney, George Harrison, Ringo Starr—during their two-week stay. Forgotten by many, Cynthia Lennon, John’s wife at the time, kept a low profile even though she toured with them. 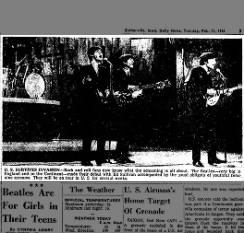 The Beatles packed the Coliseum in Washington, DC, on February 11 where they rocked the capital’s teenage set. They played Carnegie Hall in New York City on February 12 where Happy Rockefeller attended the concert with her children and professed to be a fan. Reviewers credited the performance as “awesome.” Insect-related terms were rampant as newspapers declared that the Beatles Infest Carnegie Hall and warned Beware! A Snapping Beatle when Ringo took photos in New York’s Central Park.

Most Americans over the age of nineteen were puzzled by the popularity of the Beatles and remarked that they were a mystery to an elderly viewer watching them on TV. However, Arthur Fiedler, conductor of the Boston Pops, and 69 at the time, admitted that the noise of the Beatles is great. The press asked British teenager, Hayley Mills (17 at the time), to explain the popularity of the Beatles. She said they were “simply marvelous” but thought “those silly girls are absolutely revolting.”

Later in their stay, the Wacky Beatles hit Miami Beach, where they were described as “mop-topped” and “shaggy-heads.” Interestingly, the article just below it reported on an older rock icon, Elvis Presley (29 at the time), trying to give away his yacht, formerly owned by FDR.

Our cultural memory gives us many connections to the Beatles’ 1964 visit to the U.S. Contemporary newspapers help us all, no matter our age, remember what it was really like back then, even if we weren’t there. Read more about the Beatles’ American invasion on Newspapers.com with this saved search, or create one of your own.