5 of the Strangest Sports You’ve Never Heard Of

Bored? How about sticking ferrets down your pants or sitting on top of a flagpole? Strange as they may sound, these are real sports—there’s even evidence in the newspapers!

From the weird to the wacky, we’ve collected 5 of the strangest sports people have participated in over the years. Check them out!

Ferret Legging
Ever felt inspired to put two sharp-toothed, carnivorous, weasel-like animals down your pants and let them run around? No? Well, it’s a real thing people have done.

Called “ferret legging,” the sport was popularized in Great Britain in the 1970s. It entails putting the ferrets (who can’t be sedated or missing teeth) down your pants, which are tied at waist and ankle to prevent an escape. No undergarments are allowed, and you can’t be drunk (though the idea of someone attempting this without being drunk boggles the mind). Then you see how long you can endure the gnawing, clawing, and biting of the squirming, furry creatures. Amazingly, the record is five-and-a-half hours. 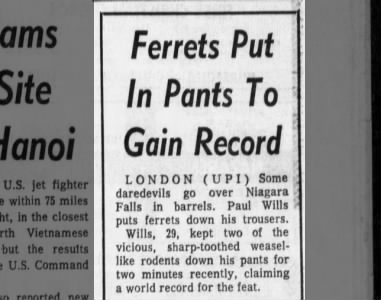 Ferrets put in pants to gain record, 1972 Sat, Jan 29, 1972 – 3 · Orlando Evening Star (Orlando, Florida) · Newspapers.com
Balloon Jumping
Touted as the “next innovation” in 1924, “balloon jumping” (or “hopping”) was set to take off as the next big thing in the 1920s. Basically, you attach yourself to a balloon whose lift is slightly less than your own weight. (So if you weighed 150 pounds, you would use a balloon whose lift was 100 pounds.) Theoretically, this was supposed to allow you to “casually jump over lakes, trees, houses, moving automobiles, and almost anything else,” because you would essentially “weigh” only 50 pounds, while your muscles would be used to moving 150 pounds. The sport never really caught on, however, due to the dangers of the sport, including the high-profile death of one of its early adopters. 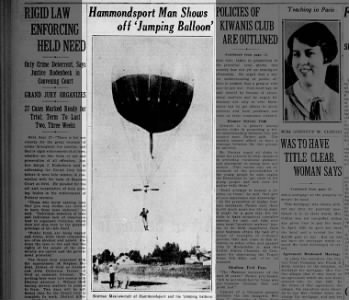 Balloon jumping photo, 1928 Tue, Sep 18, 1928 – Page 24 · Democrat and Chronicle (Rochester, New York) · Newspapers.com
Flagpole Sitting
Also a product of the 1920s was the baffling sensation of “flagpole sitting,” which was exactly what the name implies: set up a little platform on the top of a flagpole and see how long you can sit there. The stunt attracted crowds and made celebrities out of those daring enough to do it, such as Betty Fox and Alvin “Shipwreck” Kelly. Kelly’s record for flagpole sitting was an astounding 49 days! 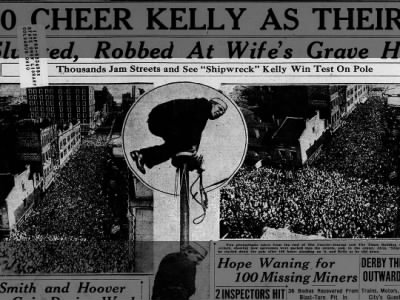 Shipwreck Kelly demonstrates flagpole sitting, 1928 Mon, May 21, 1928 – Page 1 · The Courier-Journal (Louisville, Kentucky) · Newspapers.com
Snail Racing
No one really knows how long people have been racing snails, but mentions of it began cropping up in newspapers in the 1880s. At that time, it was said to be all the rage in Paris, where enthusiasts would race snails on a smooth board with a lighted candle at one end. The rules of later iterations of the sport got more intricate, with standardized course lengths, time limits, bait restrictions, and handicap guidelines. Reportedly, snail racing got so popular in Paris that in 1912 it had to be banned in governmental offices because the clerks were betting on the races.

Snail racing has seen resurgences in popularity over the years and remains a pastime today, with the annual World Snail Racing Championships taking place in England. 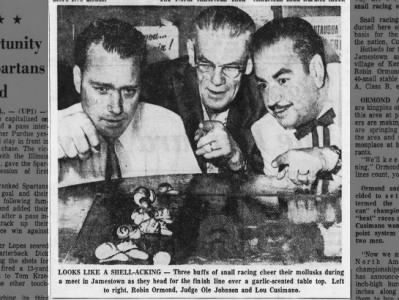 Snail racing, 1963 Sun, Nov 10, 1963 – Page 58 · Press and Sun-Bulletin (Binghamton, New York) · Newspapers.com
Toe Wrestling
If feet weird you out, this next sport is not for you. In “toe wrestling,” two competitors lock toes and then try to turn the foot of their opponent, though apparently the toe hold is often broken before either foot is turned. Another variation created in 1974 involves only locking big toes with your opponent. This type of “toe wrestling” is not to be confused with a popular older game by the same name in which two opponents seated on the ground used their feet to try to make the other player lose his  balance. 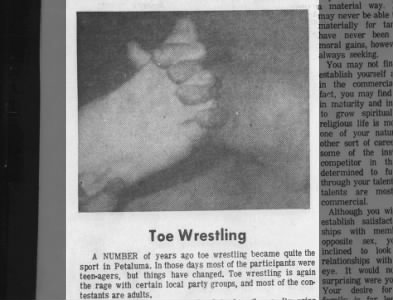