Wildfires are devastating, but they can also be scenes of amazing bravery and heroism. Check out these 4 incredible wildfire rescue stories:

In 1894, a massive forest fire burned through the pine forests of Minnesota, engulfing the town of Hinckley and other nearby settlements. Though more than 400 people perished in the fire, the death toll could have been higher if it weren’t for James Root, a train engineer.

Root’s train was headed south from Duluth toward St. Paul, and as it drew nearer the fire, it became increasingly filled with heavy smoke, making it difficult to breathe. Nevertheless, when desperate townspeople flagged down the train near Hinckley, Root stopped to get them on board. With the fire quickly approaching, Root began backing the train down the track.

Although Root increased the train’s speed, the fire finally caught up to them and surrounded the train. Still, he pressed on through the flames, until finally, they reached Skunk Lake, where the passengers were ordered to abandon the train and take refuge in the water. About 250 people were saved by the bravery of Root and the other train crew. [Read the newspaper account] 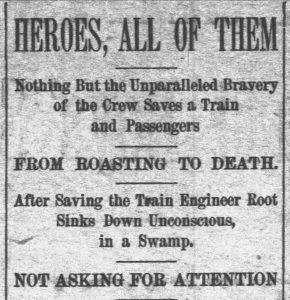 Forest ranger Edward Pulaski was overseeing fire crews in the mountains of northern Idaho when one of the biggest wildfires in U.S. history burned through parts of the northwest in August 1910. Once the fire in his area had grown too dangerous to fight, Pulaski evacuated all the fire crew he could find.

He gathered 45 men and led them through the fiery, mountainous terrain to an old mine tunnel, where he ordered them to lie on the ground. When one panicked man attempted to rush out of the tunnel, Pulaski pulled his gun on the man and threatened to kill the first person who tried to leave.

With the fire raging outside, Pulaski hung wet blankets over the entrance and used his hat to scoop up water from the mine to throw on burning timbers inside the tunnel. His men eventually lost consciousness from the heat and smoke, and Pulaski finally did as well. When they came to, they discovered that although five of the men had died inside the tunnel during the fire, Pulaski’s strong leadership had saved the majority. [Read the newspaper account] 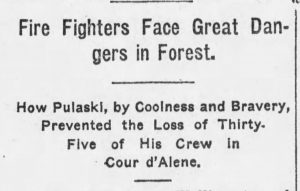 Hermit Leaves Fortune to Man Who Rescued Him from Fire

Around 1910, a young piano salesman named Eber Smith got on the bad side of a recluse named “Old Tom” Simpson, who lived in the mountains near San Bernardino, California. However, Eber eventually managed to befriend Old Tom by repairing his violin, and Eber began visiting Tom whenever he passed through.

When a wildfire swept through the area in 1914, Old Tom was laid up in bed with a broken leg. The firefighters were not willing to take the risk to reach Tom’s remote mountain cabin, but Eber braved the flames and carried Old Tom to safety above the timberline. About two years later, when Old Tom passed away, he left Eber his fortune of $500,000 (about $12 million today). [Read the newspaper account]

During a 1929 forest fire in southern Washington, a flock of sheep got trapped by the flames. The sheep panicked, and no attempts by the herders could get them out, so the sheep were finally abandoned. But they weren’t abandoned by a sheepdog named Laddie.

All on his own, Laddie herded the sheep to safety, and when the fire subsided the following day, the herders returned to find that not a single sheep was missing or injured. [Read the newspaper account] 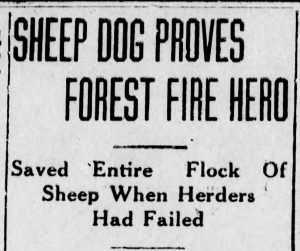