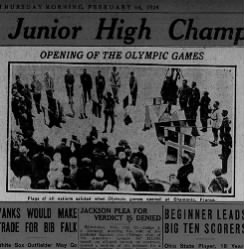 Ninety years ago this month, the first Winter Olympics were held in Chamonix, France. The games took place January 25 through February 5, 1924, and were a bit different from what we’ve become accustomed to in recent decades. The competitive spirit flourished, however, as nations vied for bronze, silver, and gold in just over a dozen events. Out of 300 athletes, women participated only in figure skating. Future “figure-skating phenomenon” Sonja Henie was one of those first female Olympians, but she was only 11 years old in 1924 and finished last.

While most people, including the press, used the term “Olympics” at the time, it was officially known as “International Winter Sports Week.” Later, the International Olympic Committee designated the 1928 games at St. Moritz as the second Winter Olympics and therefore recognized the 1924 games as the first.

Skaters were the first U.S. athletes to travel to Chamonix, sailing aboard the President Monroe just after New Year’s Day, as this was long before commercial air travel allowed a speedier journey. While Scandinavian countries dominated the games, North Americans did well on the ice, with the U.S. taking gold in speed skating and silver in the women’s fancy skating competition. Canada won in hockey, beating the U.S. team and apparently thrilling spectators as related in this play-by-play story of the final game. Previously, the Yanks amazed the hockey crowd with their tremendous speed against the British while the Canucks ran wild on the Chamonix ice when they beat the Slovakians 30-0. 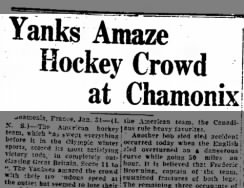 Results were broadcast from the Eiffel Tower daily, using “modern methods.” Several headlines from those first Olympics may seem familiar to modern spectators. Written in the style of the day, stories covered the opening ceremonies and the threat of a thaw melting ice venues and creating a muddy ski jumping course. And, of course, disputes and controversies were prevalent. The ski jumping technicality was revisited in 1974 when Anders Haugen was ultimately awarded the bronze. Great Britain won the curling competition and most of the skiing competitions were dominated by Norway. Ultimately, the U.S. came in fourth overall, losing to Great Britain by one point in the series, while Norway won the 1924 Winter Olympics and Finland came in second place.

There’s a handy list of Olympics dates and locations through 2006, provided by the Library of Congress. It may help you in your search on Newspapers.com for highlights of the first twenty Winter Olympics to see how some of your favorite hometown athletes may have fared on snow or ice. These historic snippets are an intriguing introduction to the upcoming—thoroughly modern—2014 Winter Olympics in Sochi next month.