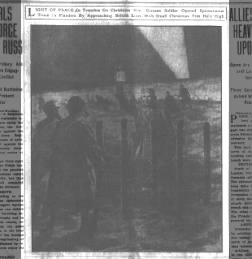 This holiday season marks the 100th anniversary of the legendary Christmas Truce during World War I.

On Christmas Eve of 1914 and the following day, an amazing thing happened along the Western Front. The rank-and-file soldiers spontaneously arranged informal cease-fires with enemy soldiers in the trenches opposite them and, in many cases, met in the No Man’s Land between the trenches to socialize with each other, singing carols, exchanging small gifts, and burying the dead (and in some instances, even playing soccer or taking photographs together). While these impromptu truces by no means involved the entire Western Front, they were widespread, especially between German and British soldiers (though in a few places French and Belgian troops as well). 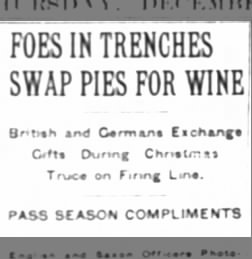 Reports of these spur-of-the moment cease-fires didn’t hit the newspapers until December 31, but once the news broke, stories of the individual Christmas truces began appearing in newspapers on both sides of the Atlantic. Perhaps one of the more surprising discoveries to come out of the Christmas truces, both for the Allied soldiers and newspaper readers back home, was that despite stories of German atrocities, the enemy soldiers in the trenches were just as human as they were. “The Germans opposite were awfully decent fellows [. . .] intelligent, respectable looking men,” reported one soldier. “I really think a lot of our newspaper reports must be horribly exaggerated.”

Not everyone supported the truces, however. High-ranking officers on both sides frowned down on the truces once they heard about them but were largely unable to stop them. Some lower-ranking soldiers disapproved as well, such as one who, upon returning to the trenches to find that the Germans had erected lit Christmas trees, remarked, “I was all for not allowing the blighters to enjoy themselves, especially as they had killed one of our men that afternoon. But my captain [. . .] wouldn’t let me shoot.” 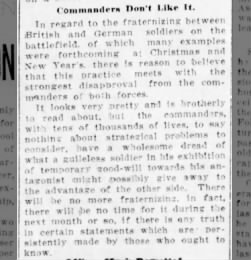 Though the truces had to end and the fighting start up again after Christmas (with some truces reportedly lasting through the New Year), the men involved would always remember the Christmas of 1914. “It will be a Christmastime to live in our memory,” wrote one soldier, while another observed that “the recollection of it will ever be one of imperishable beauty.” But perhaps this soldier’s impression summed up the experience best: “All this talk of hate, all this fury at each other that has raged since the beginning of the war, quelled and stayed by the magic of Christmas.”

Find many articles and accounts about the Christmas Truce on Newspapers.com. Or search for other topics that interest you.